Update: Tyler's birthday is actually on the 13th of the month. I'm not sure why it posted on the 12th. Maybe because I started the post on the 12th but didn't post until the 13th. 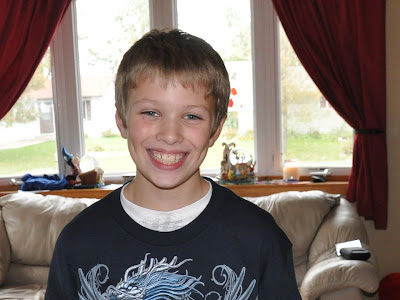 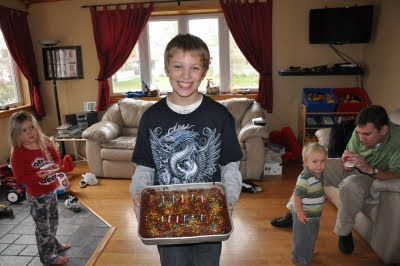 Today we celebrated Tyler's 11th birthday. I think he had a really good day. When he woke up he recived a big hug from his mom. After that he got to open some gifts. Not too long after that Grandpa Dan made the journey out to our house to see Tyler on his birthday. Then, Tyler opened some more gifts and had some donuts that Grandpa Dan brought out! After that his Grandma Kathy stopped out to take Tyler out to lunch and shopping to pick out his own gifts (a tradition both boys look forward to every year). Grandma also let's him pick out his own birthday card (which he also loves doing). Not too long after grandma left, the neighbor kids got off school and came over to hang out with him on his birthday! They also stayed for birthday cake. Next, Justin brought Tyler home Cold Stone Creamery and a Pokemon Tin. So he was very thankful for that. Next, we treated Tyler to dinner at Applebee's (where he got a free dessert). Last but not least we picked up a movie from Redbox and they are now finishing off the night with Monsters vs. Aliens.