*This is the update from Jonah's fundraiser. http://gfwd.at/1GpPneY 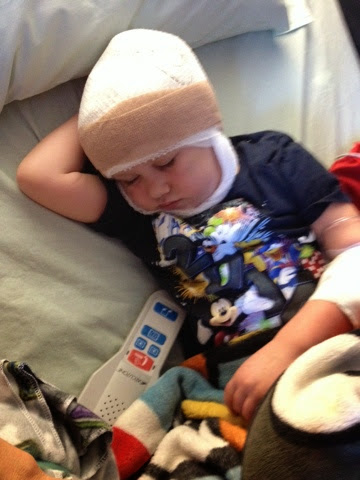 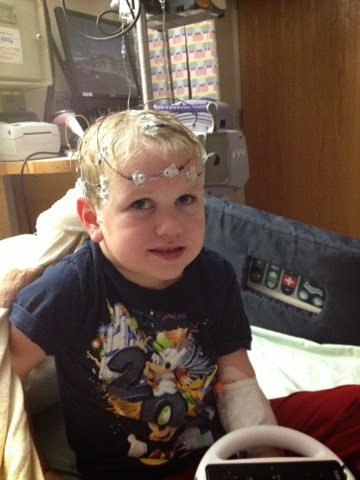 The good news is that only 3 seizures were picked up which is significantly better than back in June when it was 100's. That is even less than last January. In my opinion that is the ketogenic diet and IVIG (IVIG is what the insurance refuses to pay). Although he still has "slowing" in the background of his EEG monitoring which is not good, it has cleared up a lot since his last EEG.

The bad news is that he is still having daily seizures. At least one tonic seizure which is a stiffening where his head is lifted some off the bed after he falls asleep. He will have a tonic clonic (grand mal) seizure  about once every 1.5 weeks. Praise God they are only at night. He has some other types once in awhile if he's upset or something but for the most part his daytime seizures are under control and hopefully will stay that way.

His doctor has taken off the MAE diagnosis because at this point she is uncertain if his diagnosis falls into the MAE or LGS category (google them, you will get a ton of info)  Both are very similar forms of rare intractable epilepsy. Unfortunately, the one she's thinking he might have because of the tonics is LGS which is the worse of the two. LGS is usually not outgrown and can cause development delays where as MAE has an ok chance of being outgrown around 8-9. Both are suppose to be super responders to diet treatment so we will be trying to max that out before we go on to other medications.

Thanks again for lifting us up in prayer and generously donating. Remember every donation will be equally matched up to $10,000. Money that is given personally or through Paypal will also be included in the match. 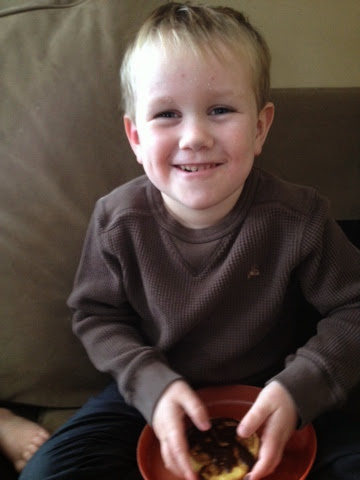 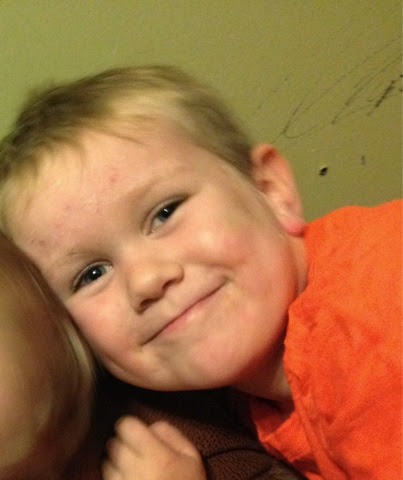 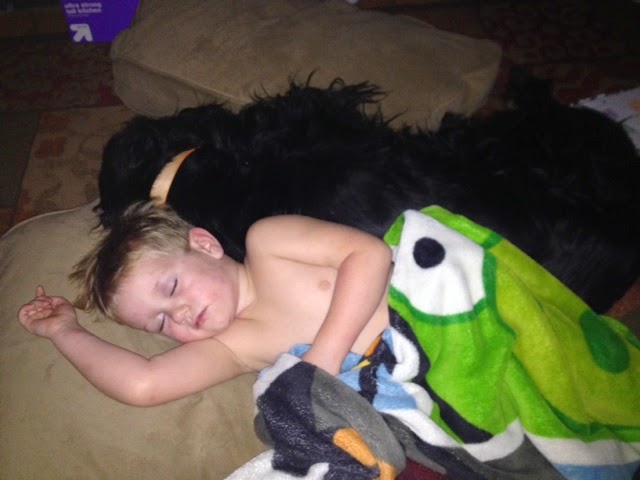 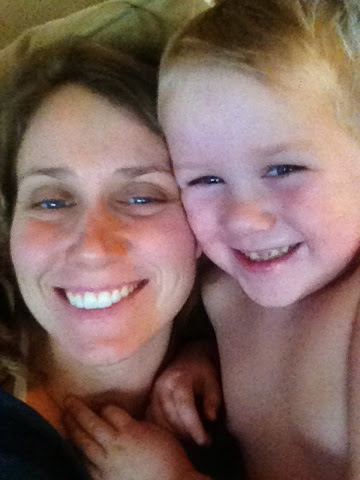 So much has happened since my last post. I really don't know where to start. I think I'm going to try to summarize.

Jonah's doctor gave us a plan:
1. Increase Depakote to what is was in the hospital back in June. If that doesn't do anything then Depakote goes out the door.

2. Maximize the diet. Bump up to a 2.5:1 which again is noticeably more fat and less carbs. If that does nothing, scale the ratio back down.

3. Add new medication from a different class of seizure meds. keep in mind though that once someone has failed 3 anti seizure meds the likely of one working is very slim. I really would not like to have to get to this point because hearing her list off the side effects were not fun. Some of the side effects she wrote down were sleepiness, unsteadiness, drooling(yes she actually wrote that). He would need to have an EKG first because these meds are alot stronger or could be hard on his heart or something.

4. Also the plan is to give IVIG every three weeks instead or every 2 weeks to see if on that third week makes any difference in seizure control. If not then after a few times at 3 weeks we would go down to 4 weeks and so on.

No, we have not heard back from Justin's work yet to see if they will make our insurance company pay for the IVIG. Our doctor is confident that she will be able to get it to go through with a peer to peer with the insurance company. So that was nice to hear.

She also mentioned that since he has so many tonic seizures (that's what he has most nights after falling asleep) that it can be a indicator that he has a more difficult case of Doose/MAE. You can imagine that put knots in my stomach right away.

As we were closing our meeting with his doctor Justin asked about medical marijuana or CBD treatments for epilepsy. She mentioned that they will be doing a CBD study at the Mayo I believe in early 2015. She said that Jonah would  meet the criteria for the study so she marked us down. We are not officially on it yet but we are on the list if that makes since. She also mentioned that for the study meds can't have changed for 30 days prior to the start of the study. So I don't know if that would change anything as far as, the plan. She also mentioned that when CBD becomes available next June/July it will be very expensive like $700-800 a month and insurance probably won't pay for it. So getting into the study would mean free for us for awhile even after the study.

I feel like a shlub for asking people to donate money to us. I am also very thankful for every dollar. I lay awake at night thinking about the cost of everything for Jonah. $15,000 sitting in collections from IVIG so far. $80 a month for his medications, $600 for a nighttime seizure monitor that will tell us if he is having a seizure at night, $100 to get to the Mayo a month, $317 co-pay for each hospital stay which the next one is coming up November 20, a ton of money for his dental bills which is due to the seizure medication effecting his gums/teeth and it seems like the list goes on. It just keeps turning and turning in my head. So, thank you for your donations, thy will go 100% to help my boy fight this hard to treat epilepsy.

I'm trying to figure out a fundraiser ideas or a silent action or something but I don't even know where to start.

*UPDATE: We are in phase 2 of the Depakote Carnitine increase. (sorry, I forgot to mention that his doctor increased his carnitine supplement my a 1/4 of a teaspoon, which is actually a lot) he actually has been having MORE daily seizures. I hate daytime seizures. Also, he has broken out in hives. I think the hives are from the increased carnitine but really I don't know they could be from the increased Depakote. I have no idea why the increased seizures. Justin thinks it's the Depakote. We did call the on call dr but them were no help. We will call his doctor on Monday. For instance today he had has at least 3 different seizures not including the regular ones he has while he's sleeping. If you add those it's at least 5 today. That is 5 too many.

Thanks again for all or your support. Prayers, funds, pizza...everything.

In case anyone would like it here is our donation page link:
https://www.giveforward.com/fundraiser/yzb6/jonah-s-myoclonic-astatic-epilepsy-fundraiser?utm_campaign=update&utm_medium=email&utm_source=giveforward
Posted by KB's at 12:12 AM No comments:

We are back down at the Mayo and hospital again to meet with his doctors and so he can get his infusion.

Jonah has been doing fairly well. He's not seizure free but with Doose Syndrome his seizure control is great compared to what it could be and has been been.

He still continues to have grand mal (tonic clonic) seizures in his sleep. He actually just had one this morning. :( He also is still having tonics nearly every time he falls asleep. These last couple weeks he has also had increased daytime activity.

If it is on your heart to help monetarily we have started an online fundraiser for Jonah to help cover his past and ongoing medical bills, medications, special equipment, dental work due to medications...
http://www.giveforward.com/fundraisers?query=Jonah+Kittelson-burke or we can except donations through PayPal on this blog. He money goes directly into an account set up for Jonah and the expenses for his care. 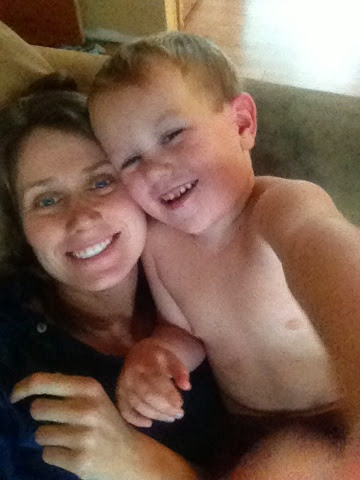